A wood-handled mop rests in a glass jar half-filled with a brownish liquid. In one fluid motion, the grill lid opens, and a big hand finds the mop. Another finds the jar. With a few sloppy slaps, flavor streams across barbecue chicken halves , sending a savory scent sizzling up from smoldering coals.

Then, back down with the lid, sealing the ceramic box filled with glowing rocks and venting smells of meat and smoke through the top.

With that view at an early age, I was curious. And why not?

This ritual I watched from toddling times was different than the normal cooking of meat. Different than hamburgers, steaks, or chops that filled our menu of patio-grilled main dishes. Especially different from anything cooked in the oven or crockpot.

No, barbecue chicken was different. It required a process and an investment in time. Special seasonings, basting mops, and sauces at the side. The results, too, were far different. Better. In my mind, a lot better.

Better enough to be a barbecue gateway. An early intro to cooking meat low and slow, a pastime I’ve practiced for many years.

My low and slow journey starts with those barbecue chicken flavors. And a worn card in the family recipe box. Maybe it can be your entry point for my family’s tradition of cooking particularly prepared cuts of meat over smoke and fire.

Unlocking a Transformation with Fire, Sauce, and Texas Barbecue Royalty

On barefoot summer weekends, I watched my Dad execute transformations. He was a patio wizard with a grill brush and tongs. A pyramid of briquettes became a bed of ashy coals. Halves of raw chicken morphed into barbecue delight on grill grates blackened by years of use.

A key component in these barbecue reactions was a liquid blend of ingredients. The soupy concoction hid in a jar at the back of our refrigerator. Finding those flavors today requires a patient dive into the internet of Southern food tradition. Or, if you’re lucky, a few minutes spent with this narrative.

And this best barbecue chicken recipe in the wide, wide world of food blogs.

Now that you’ve found it be aware: this isn’t just any recipe for mop and meat rub. This meat mop is presidential. Better yet, it comes directly from royalty, the King of Barbecue!

With a pair of Baby Boomer parents, including a Lone Star State native, it makes sense that Walter Jetton’s magic recipes filled their fridge and spice rack. If it was good enough for President Lyndon Johnson (and Lynda Bird, who served Jetton’s ribs in the White House), it was good enough for us. Even if we used the mop on chicken in smaller quantities than the 6 quarts Jetton used to baste a side of beef.

Recipe for Barbecue Mop for All Meats

My dad generally sat in a web strap folding chair stationed near the grill. Often, other activities occurred near the grill and cooking chicken. Honey-do list items. Stick-picking in the yard. Patient ways to pass the time.

“Every five or six minutes, use these tongs to turn over the chicken,” Dad instructed during my first barbecue cooking tutorial. “Then give it a good soak with the mop.”

Unlike a thick barbecue finishing sauce, the barbecue mop for the King of Barbecue and his loyal subjects was a thin liquid. With a splash of the mop, the mixture finds nooks and crannies around chicken skin. It collects in the rib cage. It steams into the meat, mixes with the rub, and cooks into the flavor.

“Mr. Jetton does not favor basting meats with tomato‐flavored sauces as they are barbecued,” the New York Times reported on Nov. 25, 1964. “As the meats cook, they are mopped, rather than brushed … Barbecue sauce is served on the side after the meats are cooked.”

However, what the New York Times lacks in its reporting is the recipe for Walter Jetton’s Mop for All Barbecue Meats.

Combine all ingredients and heat until it simmers. Allow the solution to cool and sit overnight. Warm before applying liberally to the meat while it cooks.

Yield: About one quart of barbecue mop. 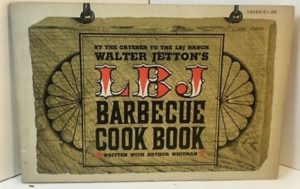 Barbecue Chicken Rub to Use Before You Cook

Like our barbecue mop hiding anonymously in our Alabama fridge, the Walter Jetton’s barbecue chicken rub was stored in an appropriate fashion. An empty Season-All shaker found new life with a masking-tape-and-marker name tag: “Poultry.” Other homemade pantry peers in the spice rack: “Ribs.”

If you dissect the Poultry shaker spices, these are the ingredients you find:

Barbecue aficionados argue about the application and timing for the rub against the meat. When it comes to this rub recipe and barbecue chicken, I won’t claim one method is better. I can, however, outline what I watched as a child on summer Sundays.

Generally, a halt was brought to after-church gardening or other outdoor activities around mid-afternoon. Chicken halves went from the refrigerator to a wax paper unfurled across the kitchen counter. Generous application – but not caking – of the “Poultry” shaker covered the chicken’s meat and rib sides. (Today, I’d encourage you to work that rub under the skin a little bit, but don’t go crazy. Leave the skin on to protect the tenderness.)

Let the chicken sit out for 30-45 minutes. Don’t worry; it is still safe outside the fridge for up to 3-4 hours. This helps ensure an even temperature from the start of the cook. Now, get the grill ready and warm up your mop to a temperature just below a simmer.

How Do You Cook Barbecue Chicken?

I’m not sure my age when the question first came up. I know I was pretty young when curiosity overflowed into the desire to do it myself.

And there was probably a lot of “let me try” before Dad turned over the mop completely. At first, I got a turn to baste. Opening the grill lid and turning the chicken came a little later. So did building a fire.

Eventually, though, I got my chance. Here’s what the process looked like:

Did I mention, never use lighter fluid?

Apart from that, I suggest a few additional improvements to our approach in the 1980s. These updates might deliver better results.

In the end, as is the case with most barbecue adventures, if you’ve got a good fire, meat, seasoning rub, and barbecue mop – it is kinda hard to screw it up.

WARNING! DO NOT DROP THE BARBECUE CHICKEN

Thinking back on when my cook was complete, my barbecue chicken done, I was proud.

It looked good – like Dad’s. It smelled good. I did all the right things. I knew it was gonna taste good.

I got the approving nod of “done” from Dad.

So, off the grill and onto the plate goes the barbecue chicken. Maybe it was my first. Maybe not. But on one of those early cooks, I learned a valuable lesson: plates are slick and cooked meat is inclined to slide.

Elated, I spun toward the house, plate of barbecue pride in my hand, and watched as one chicken half slid right to the ground. Fortunately, only Dad saw it.

And in one fluid motion, I swept a hand to the ground while the other held the plate. I scooped up the chicken. With a few sloppy brushes, I knocked the grit off my prize and left the rest as flavor for my best barbecue chicken.